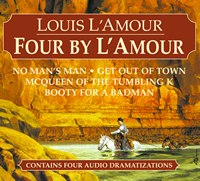 This set contains four thrilling dramatizations of Louis L'Amour's short stories, featuring all the excitement of the Wild West -- the fierce passion and determination of the men and women who dared to tame the rugged terrain and call it their home, the villains who threaten their dreams, and the cowboys who sought their own destinies across a uniquely American landscape -- Each story is presented with rousing music. authentic sound effects and a full cast. bringing to life the flavor of the Old West, and transporting the listener back to those uncertain days.

No Man's Man
Passion drives fast gun Lou Morgan to the town of Battle Basin- passion and the promise of $5,000. For in this dusty town lives the wildly irresistible Nana Maduro, the woman Morgan loved enough to kill for, the woman who walked away from him without a word. Now, bitter but still caught in her spell, Morgan hires on with one of Nana's suitors to eliminate that man's rival. But when Morgan finds himself the target of two ugly killers, he can't help but wonder what Nana's admirers are really after, or if he'll live to find out.

Get Out of Town
Ever since his father died, fourteen-year-old Tom Fairchild has helped his mother keep the ranch going. Soon it would be time to gather the cattle to market, and Tom was sent to ride into town to hire a hand. When he chose a stranger named Riley, the townspeople, the former hands, and the local law didn't approve. Worse yet, the sheriff said Riley was a former convict. But Tom didn't care. It was the first real decision Tom ever made on his own. Now he must face a threat closer to home, a danger he never expected. Tom Fairchild isn't about to back down—but he's in more trouble than he can handle by himself.

McQueen of the Tumbling K
Ranch foreman Ward McQueen recognizes trouble when he sees it-and trouble is what the Texan sees when he spies the tracks of a wounded man in the middle of the big Tumbling K spread. In town, he learns that a tinhorn gambler has just won the ranch next to the Tumbling K in a dirty card game--and is turning his oily gaze toward the K's pretty owner, Miss Ruth Kermitt.

Booty for a Bad Man
Tell Sackett knew that gold spelled trouble faster than anything except a woman, and he had a lot of gold. Problem was, none of it was his. Tell was just delivering the gold for a fee. The Coopers, a gang of bloodthirsty desperadoes who'd slit a man's throat for the silver filling in his teeth, were hot on his trail.

So, the last thing Tell needed was Christine Mallory, a pretty, stuck-up city woman, to slow him down. Taking her on could easily cost Tell his life. But it was that or leave her in the desert to die. As Tell Sackett's father used to say, "Women are trouble." Tell was about to learn what he meant.

This collection includes:
No Man's Man • Get Out of Town • McQueen of the Tumbling K • Booty for a Bad Man 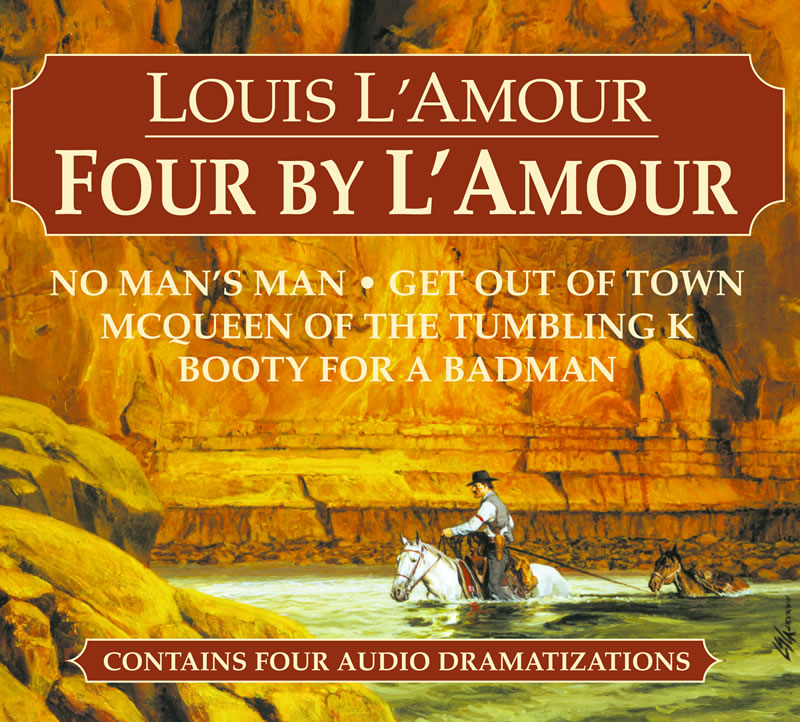