Selected as one of the
TOP 25 BEST WESTERNS of all times!

He left the West at the age of seventeen, leaving behind a rootless past and a bloody trail of violence. In the East he became one of the wealthiest financiers in Americaand one of the most feared and hated.

Now, suffering from incurable cancer, he has come back to New Mexico to die alone. But when an all-out range war erupts, Flint chooses to help Nancy Kerrigan, a local rancher. A cold-eyed speculator is setting up the land swindle of a lifetime, and Buckdun, a notorious assassin, is there to back his play.

Flint alone can help Nancy save her ranchwith his cash, his connectionsand his gun. He still has his legendary will to fight. All he needs is time, and that's fast running out. 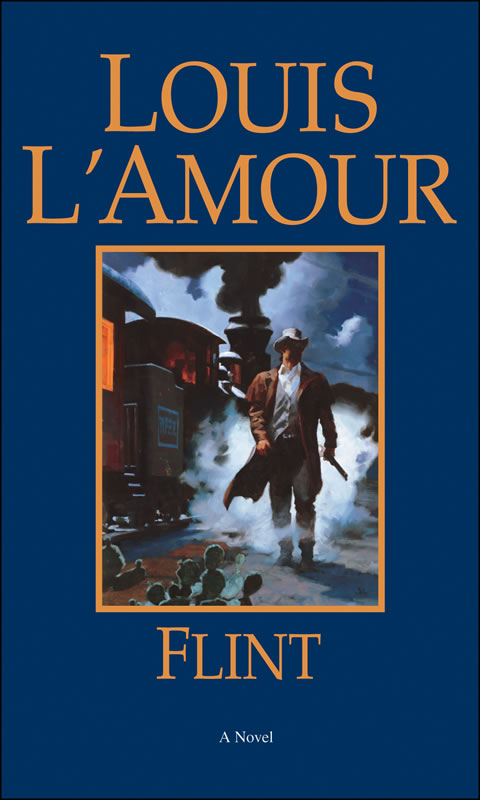 FROM THE LOUIS L'AMOUR DISCUSSION FORUM:

NOTE: The following was posted as a topic in the Discussion Forum. We love this kind of stuff but for the sake of liability we have to say: please DON'T TRY THIS AT HOME!! Experts only. Notice all the safety precautions taken by our friend Longrifle Joe. Also, please don't consider our making this kind of information available as an invitation to try some of this stuff yourself. We cannot be responsible for anyone elses actions.

The Kid at the Crossing Shoot-out

A while back we had a discussion about "the Kid at the Crossing" and his shooting skills. I am not the best or fastest "gunnie" around by any means, but I do know how to handle a single action after shooting them on a regular basis since I was 12 or 13 (I am soon to be 64 in June). At different times I have played with fast draw a bit, and know that if I were about to be engaged in a gunfight, I'd want the gun in my hand before any action got started. But, I satisfied myself that shooting 9 rounds from a pair of BP SA's within 5 or 6 seconds is possible and that SOME people could likely get 9 hits similar to the story in Flint (I don't think I could duplicate the 5 head shots though) even on a fantastic day. Bert mentioned trying the trick in a closed room just to see if the lights would go out from the concussion, so I decided to try it if I could. I had my chance today!

There is an old log house house here in the county on a farm belonging to a friend, and it is soon to be torn down and hopefully rebuilt in a different location in the near future. When I told him what I had in mind, he agreed with the proviso that I have firefighting equipment on hand just in case-----and I managed to gather up a few fire extinguishers and a couple of helpers which satisfied him.

The front room is 15 feet long and 11 feet wide, has one small window (with glass intact) and a really bad wooden door which is mostly rotted, but standing yet. There is another door going into a back room, just 6 feet high and 41 inches wide. The ceiling is almost exactly 7 feet high and is covered with a thin lathing. I think this is not original and was added some time much later after the house was built. The floor is made of planks on sill logs (mostly rotted) and quite uneven-----so this is not a really sound structure right now---but most of the wall logs etc. can be saved. The roof was originally cedar shingles I think, but was covered long ago with tin which is in bad shape.

In preparation for this project, I had acquired a good number of cardboard boxes and after flattening them, I banded them with a metal strip----a 2 X 6 on top and bottom-----and I compressed them pretty tight. I had a stack high enough to mostly fill the door leading into the back of the house. This was my target for I wanted to use real loads with lead balls and not some sort of substitute or "blank" loads.

The lights I used were twofold-----I used 2 coal oil lamps---both antiques over 100 years old---one which stood on a table in my Maternal Grandma's house and passed on to me through my mother. Another was a wall mounted coal oil lamp with a reflector. It too came from my mother (who died this past summer at age 97 and 2 months)----she couldn't remember where she got it but I remember it in our home when I was quite small---so it is fairly old too. I also used candles, 6 to be exact, spaced around the room.

The guns I used were 2 repro's purchased from Cabellas quite a few years ago, and which I have shot sporadically over the past 10 years or so. One is a .36 Navy, the other a .44 Army. I loaded them both with proper lead round balls and fffg black powder (not a substitute). Over the years I have become quite good at "slip shooting" a single action, and the hammer spurs on these repros (as well as the originals) lend themselves well to this style of fast shooting a Single Action. Most modern SA's have too wide a hammer spur set at too low an angle, and the checkering interferes to an extent too. The older models are much better IMO. I wasn't interested in fast draw EXCEPT for getting the second gun into action as soon as possible, so I put a foam rubber cushion on the floor in front of me where I simply dropped the first gun when empty, and I had the 2nd gun in a crossdraw holster moved almost directly into the front of my body for the 2nd gun. We had a stopwatch and it was started when I fired the first shot and clicked on the last one. I fired 9 shots for 3 different sets-----and if i may brag, using this method, I consistently fired 9 shots in almost exactly 5.2 seconds each time. 5 shots from the first gun, and 4 from the second.

Now the results----the candles went out almost immediately---those closest to my end of the room on the firtst shot and at the other end of the room on the 2nd or 3rd shot. The wall mounted lamp went out as I finished the first gun, but the table mounted lamp never went out------I moved it to different locations---very close to the guns on the last round, but it didn't go out-----the wall mounted one went out each time no matter which end of the room I placed in on----and I think it was the concussion coming down from the ceiling. Of course the 2 lamps had globes around them-----but the table lamp was on a stand which was 36 inches high and was further removed from the concussion from the ceiling---other than that I have no idea why it didn't go out.

If you have never fired a handgun in the dark, the flash is unbelievable

If you have never fired a handgun in the dark, the flash is unbelievable, and these old black powder guns splashed out a HUGE amount of flash. We all used both ear plugs and ear muffs, but I could feel the pressure from the concussion. My own conclusions, based on this admittedly unscientific project are as follows: "shooting out the lights" has some basis in fact----certainly within a small space. If there were SEVERAL guns firing at the same time, the concussion would be magnified, and probably ALL the lights would go out. Unprotected flames (candles) will go out very quickly, but the globe encircled flames are more resistant to the concussion of course.

After my experiment, I wished I had brought some of my cartridge handguns and tried them----I wonder what a .45 auto would do-----I can fire 9 shots in one of them pretty fast---faster than the 2 SA's I'm sure. And what of the venerable .44 magnum? Or a pair of .357's or even a hi-cap 9mm? I wish I had tried a 12 gauge shotgun, but I was so focused on the cap and ball guns that I didn't think beyond that.

If anyone else wishes to try this trick, PLEASE use ear protection-----I could tell the concussion was pretty terrific. Oh, and the cardboard captured all the balls----not a single one penetrated to the other side. I was shooting into the "edges" of the cardboard which was tightly compressed, and was about 20 inches wide. The cylinders were all packed full, and the balls pressed tightly and covered with a liberal covering of grease to prevent multiple or cross-chamber discharges.