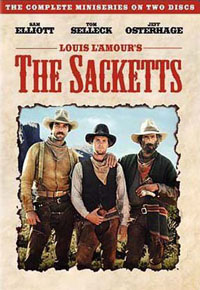 Western excitement in the tradition of Lonesome Dove.

To avoid a Tennassee blood feud, two Sackett brothers head westward toward an uncertain future. "Ride with the law," Mar counsels. They do more than that. They become the law.

Tom Selleck, Sam Elliott and Jeff Osterhage join veterans Glenn Ford, Ben Johnson, Slim Pickens and more in The Sacketts, based on two (The Daybreakers and Sackett) of the more than 100 books buy the world's most beloved novelist of the American Frontier, Louis L'Amour

Young Tye Sackett (Osterhage) lucks into a cattle-drive job. Orrin (Selleck) soon signs on with the same outfit. Meanwhile eldest brother Tell (Elliott) prospects for gold in the high country. Each aims to make it on his own in a West of open landscapes and clenched fists. But each also stands up for the other when the going gets tough. Their guns blaze a name for themselves in untamed New Mexico territory: The Sacketts.