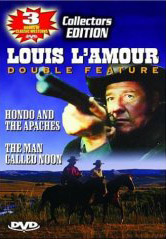 Hondo and the Apaches / The Man called Noon

Hondo and the Apaches

This Louis L'Amour classic is based on the original John Wayne film, Hondo. Ralph Teager stars as Hondo Lane, an Indian scout assigned a nearly impossible mission. He must mediate between the Native Americans and the United States Army during a time of dangerous instability. The bountiful land that once remained still is now flooded with men ready to do anything to get what they want. The question remains, can men who fought each other and once tried to kill each other, make peace? Get ready for some rip-roaring, gun-slinging, action-packed adventure.

This feature, made up of material from the short-lived TV series, HONDO. Leading man Ralph Taeger has a wry quality which is refreshing. A highlight comes when he's staked-out by a vengeful Apache who's about to pour hot coals on Taeger's bare chest when a rescue intervenes. The extreme angle at which Taeger's legs are staked apart in this scene must set a record.

They Buried The Wrong Man.
He Won't Make The Same Mistake.

A gunslinger known as Noon (Crenna), fights for vengeance after losing his memory during a surprise attack. A classic western/drama film with great performances by Richard Crenna and Stephen Boyd.