Hopalong Cassidy is one of the most enduring and popular heroes in frontier fiction. His legendary exploits in books, movies, and on television have blazed a mythic and unforgettable trail across the American West. Now, in the last of four Hopalong Cassidy novels written by Louis L'Amour, the immortal saddleman rides againthis time into a lonely valley of danger and death.

Hopalong Cassidy has received an urgent message from the dead. Answering an urgent appeal for help from fellow cowpuncher Pete Melford, he rides in only to discover that his old friends has been murdered and the ranch Pete left to his niece, Cindy Blair, had vanished without a trace. Hopalong may have arrived too late to save Pete, but his sense of loyalty and honor demands that he find that cold-blooded killers and return to Cindy what is rightfully hers.

Colonel Justin Tradwar, criminal kingpin of the town of Kachina, is the owner of the sprawling Box T ranch, and he has built his empire with a shrewd and ruthless determination. In search of Pete's killers and Cindy's ranch, Hopalong signs on at the Box T, promising to help get Tradway's wild cattle out of the rattler-infested brush. But in the land of mesquite and black chaparral, Cassidy confronts a mystery as hellish as it is hauntinga bloody trail that leads to the strange and forbidding Babylon plateau, to $60,000 in stolen gold, and to a showdown with an outlaw who has already cheated death once... and is determined to do it again.

When Clarence E. Mulfoldthe original Hopalong Cassidyretired, he chose the young Louis L'Amour to carry on the Hopalong tradition in four classic novels, including The New York Times best-sellers The Rustlers of West Fork, The Trail to Seven Pines, and The Riders of High Rock. Long out of print and now published for the first time under the author's own name, Trouble Shooter is a vividly authentic tale of the Old West that bears the unmistakable Louis L'Amour brand of swift, sure action, hard-fought justice, and frontier courage. Capturing the unquenchable thirst for adventure, the passions that drove men, and the perils that awaited the, in an untamed new land, this extraordinary early novel gives us Louis L'Amour at the height of his powersan enduring testament to America's favorite storyteller. 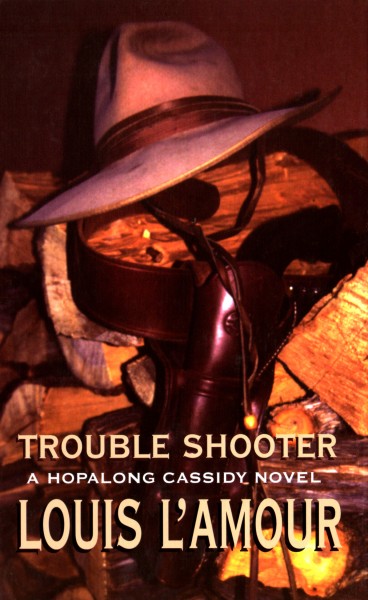